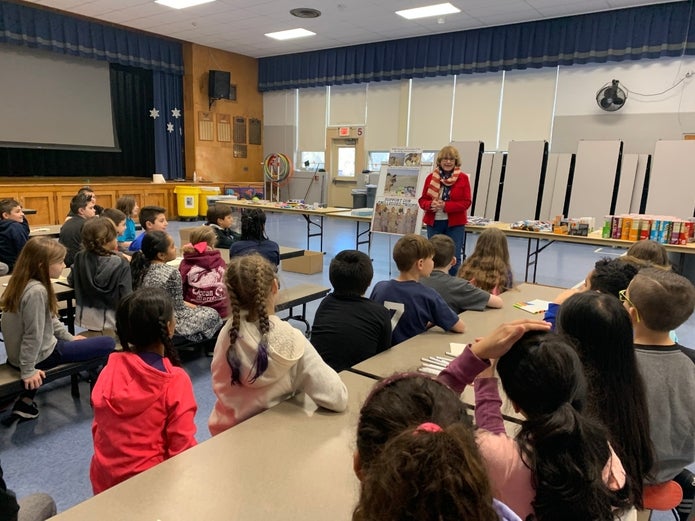 Middletown keeps the memory of Lt. Dennis Zilinski alive, as his parents spoke to fourth graders at Fairview Elementary this January.

MIDDLETOWN, NJ — This January, Middletown children learned the story of Lt. Dennis Zilinski, a Middletown native and U.S. soldier who was killed in Iraq by a roadside bomb in 2005.

It was part of an effort at Fairview Elementary where students brought in supplies for deployed troops. The school’s 50 fourth-grade students brought in items such as toothbrushes, toothpaste, lip balm and soap, as well as “goodies from home” they can’t get overseas, including Pringles, beef jerky and playing cards.

Dennis’ mother and father, Marion and Dennis Zilinski, also went to Fairview last week and spoke to the fourth graders about their son, and told them what it’s like to serve abroad in the U.S. military.

“You don’t know how excited these men and women will be to get your packages,” said Marion Zilinski, according to a statement provided afterwards to Patch. “When you’re in a place like Afghanistan, stores don’t exist at the corner where you can buy a toothbrush or lip balm, and it’s no fun to go without items you really need.”

In 2006, Zilinksi’s parents created the Lt. Dennis W. Zilinski, II Memorial Fund. His fund will cover the shipping costs to send the items from Fairview Elementary to troops stationed overseas.

Marin’s son was only 23 years old when he died while serving his country. Zilinski grew up in Middletown, and he graduated from Christian Brothers Academy in 2000, where he was a standout member of the varsity swim team. He graduated from the U.S. Military Academy in 2004 and was deployed to Iraq with the 101st Airborne Division in September of 2005.

Only two months into his deployment, on November 19, 2005, Zilinski was killed by a roadside bomb that went off near Bayji, 155 miles north of Baghdad. He was one of the four American soldiers killed that day by a roadside bomb.

Marion went on to tell the children that her younger son, Matthew, is currently deployed with the National Guard while his wife stays home in New Jersey caring for their three daughters.

“My son and his soldiers will receive some of these items, and they’ll be very happy,” she said.

Lizzy Wittmer, a fourth grader at Fairview, could relate, as her father serves in the U.S. Army.

“I feel good, and I know it’s going to help people, because after I was born my dad had to go to Afghanistan for a year,” said the young girl, according to a statement. “This helps them survive and be happy.”

The students also made cards for the troops.

“Not only did our fourth graders collect needed supplies for those who are deployed, but they got to hear first-hand from the mother of a fallen soldier how the items would make a difference for morale overseas,” said Michael Melando, Fairview’s principal.

One of the main accomplishments of the Zilinksi fund is sponsoring service dogs for wounded soldiers suffering from PTSD and TBI. To date, the fund has sponsored more than 100 dogs at a sponsorship of $15,000 per service dog. Additionally, his fund also provides scholarships for students at Zilinski’s alma mater, Christian Brothers, and Trinity Hall, the girls’ Catholic school in Tinton Falls.